As your React app gets larger, you may have to start worrying about its bundle size.

An app’s bundle size is the amount of JavaScript a user will have to download to load your app.

The bigger the bundle size is, the longer it will take before a user can view your app. If this gets too slow, it can lead to frustration for your users, especially those with slower internet connections.

The easiest way to see your app’s bundle size is to open the network tab in your browser devtools, and load your app. You should see two JavaScript files being loaded: 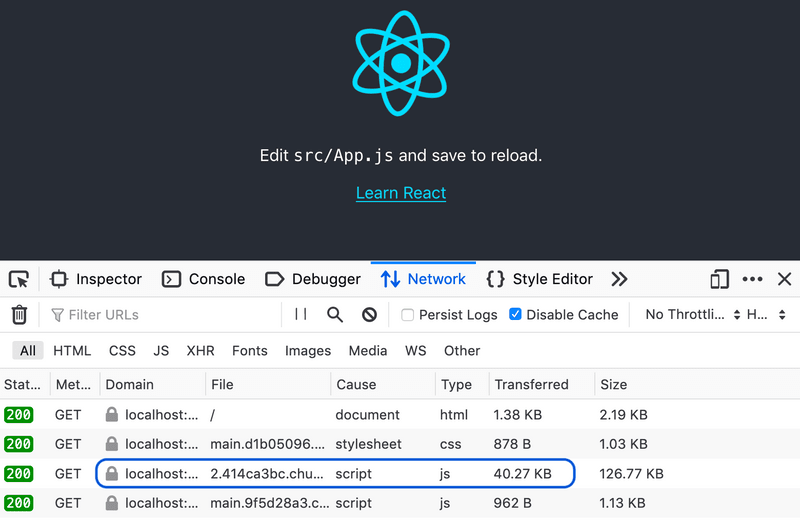 The much smaller one contains actual code that we've written, while the larger one (which I've highlighted) contains the code for all the libraries living in our node_modules folder.

The transferred value is the amount the user has downloaded, while the size value is the true value after it has been unzipped.

The bundle size in development mode will be much larger than in production mode, so don’t get too scared if it looks huge!

If you're not sure why your bundle is so big, there are a couple of tools that can help you to visualise what libraries make up your bundle.

If you’re using create-react-app, it only officially supports using source-map-explorer, which you can set up using their guide.

However I think that the webpack-bundle-analyzer is the better tool for analyzing bundles, and if you're interested there's currently a workaround to get it working with create-react-app.

This is what the webpack-bundle-analyzer will create for a fresh create-react-app: 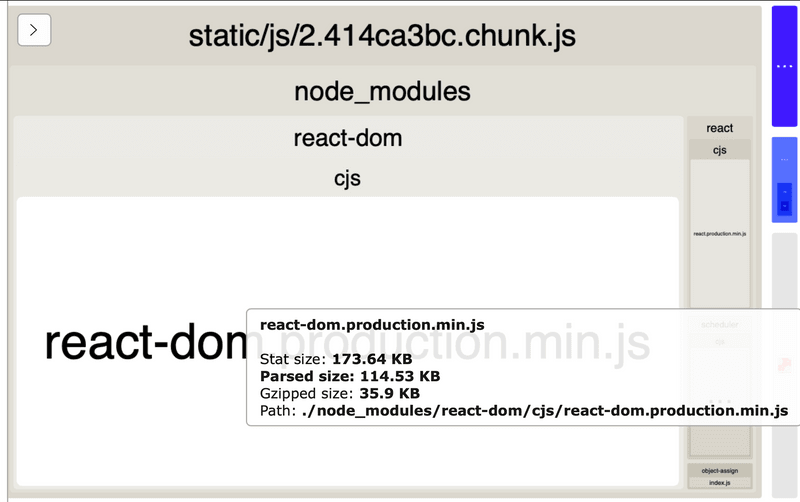 From top to bottom - we can see the name of the bundle (which will match what you see in the network tab), and then the node_modules folder. Inside of that you can see that react-dom takes up the majority of the bundle size and then react takes up a much smaller amount on the right.

Reduce your bundle size by code-splitting

Instead of keeping all your code in the one bundle, you can split it up into multiple bundles to be loaded separately. This is known as code-splitting.

If you have a fairly complex page that takes a long time to load, you may need to code-split on the one page. Finding functionality that isn’t immediately needed when a user loads the page (and is expensive to load) may be a good place to start.

In this example, we have a chart that is only shown when you click the “Generate chart” button:

After adding react-charts to our app, this is what our bundle will look like: 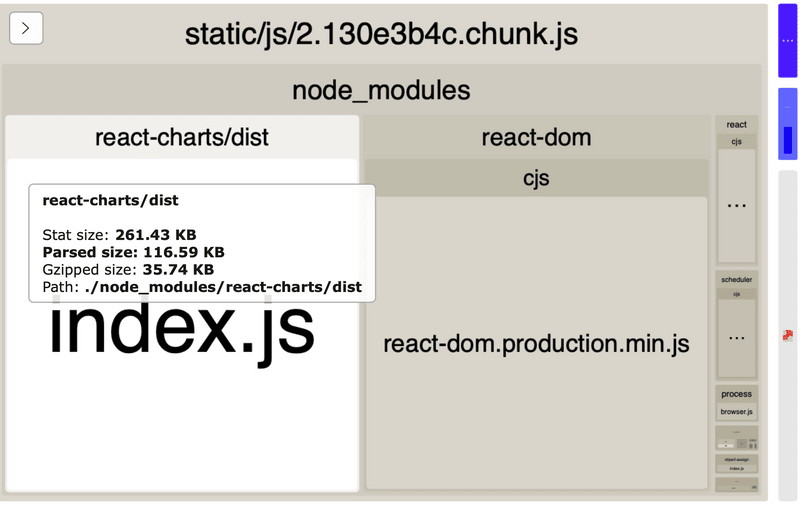 We can see that where react-dom used to take up most of the page, react-charts takes up just as much space (which makes sense since both libraries are about the same size).

To code-split the chart into its own bundle, we'll be using React’s lazy function and Suspense component.

One caveat is that React.lazy only works on default imports, and right now we’re importing Chart as a named import. So first we need to create a separate file that will be responsible for importing Chart and exporting it as a default:

Now in our main file, we can lazily import Chart from the new file we just created:

The code wrapped by lazy (in this case the Chart library) will be downloaded in a separate bundle at the moment it is required - which is when the user presses the button to show it.

Then we wrap our chart in the Suspense component, which allows us to show a loading state while we're downloading this new bundle.

Now when we open the bundle analyzer we can see that we have two separate bundles: 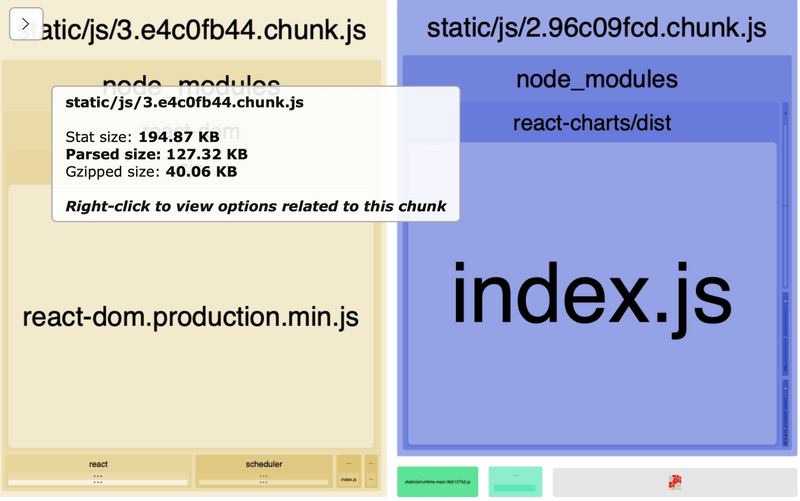 And to be doubly sure that these bundles are being downloaded separately, we can go back to our network tab, and see that the bundle containing the chart (on the third row) only gets downloaded after you click the button.

If you import a library but don’t use it, by default it will still be included in your bundle! Leaving unused imports in your file is never recommended (and should be caught out by your linter anyway) but if you did happen to leave some in, you can prevent it from getting added to your bundle by using tree-shaking, which you can read about here.

And there you have it! To learn more about code-splitting, the React docs provide a great guide on it which I’d recommend checking out.