Use memoization in your code to reduce unnecessary re-renders

Memoization is the act of storing the result of an expensive function call, and re-using the result whenever it’s required, instead of re-calculating it unnecessarily. It’s not something you’ll need to use every day, but something to keep in mind if you’re looking for ways to improve the performance of your React app. 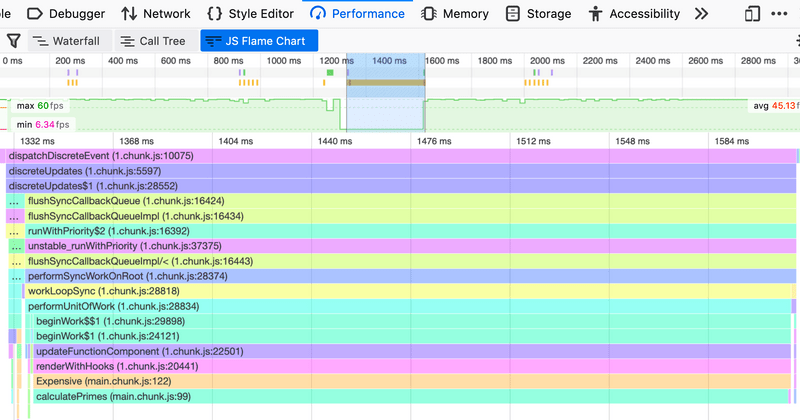 What you’re seeing here is a flame chart in the Firefox browser (you’ll see something similar in Chrome). Up the top is a complete timeline of what happened during your recording, and the darker blue bit is the section of the timeline that I’ve selected. All the colorful bars are what’s happening in our app in that selected section of the timeline.

In this scenario I’ve pressed a button on my React app at about the 1250ms mark - and the framerate tanks (as you can see by the green line dropping at the top). We can see the root cause (at the bottom of the screen) is a calculatePrimes function happening inside of an Expensive component.

By default, when a parent component re-renders, all of its children components will re-render too. So in this case, each time someone clicks the button (and changes the state of App, causing it to re-render), Expensive will also re-render and call calculatePrimes.

Considering the fact that we are passing the same prop in to Expensive each time, calculatePrimes is going to return the exact same output each time. It doesn’t really need to be re-rendered, and so there is an opportunity here to memoise the component.

We can make a component only re-render once its props have changed by wrapping it in React.memo:

Since ExpensiveMemo's value prop will always be 100, it will render once when the page initially loads, and then never re-render again.

Watch out for your props!

In the above example, the prop we’re passing in is a number. But what if we passed in an object or an array?

Doing this will cause the Expensive component to always re-render, as we’re creating a new array and passing it in each time.

On the other hand, if you modified an already-existing array and passed it in as a prop:

That would never cause a re-render, as React memo only does a shallow comparison on its props, which means that it only cares that countArray is the same array (and not what’s inside of it).

To fix this, you can pass in your own custom areEqual function as a second argument to React.memo.

Instead of worrying about whether we’re going to cause ExpensiveMemo to re-render or not, alternatively we can just memoize the expensive calculatePrimes function using the React.useMemo hook:

The first argument we pass into useMemo is the function to calculate the value that we want. The second is an array of its dependencies (things that if they change, we will want to recalculate the value) which in our case is just the value prop.

Now calculatePrimes will only get called whenever value changes!

If you’re using class components, there are libraries out there that accomplish the same thing as useMemo, such as memoize-one.

If your app is fairly small or doesn’t have any expensive calculations, memoizing things in your code will add more code and complexity without actually providing any performance benefit so it’s not something I’d advise using - but I think it’s definitely a good thing to keep in mind especially as your app grows bigger.