As a kid I really wanted a dog. After begging my mum, she gave in with the proviso that I would be in charge of feeding and walking it twice a day. And so I got my dog, Aka, in 2005. 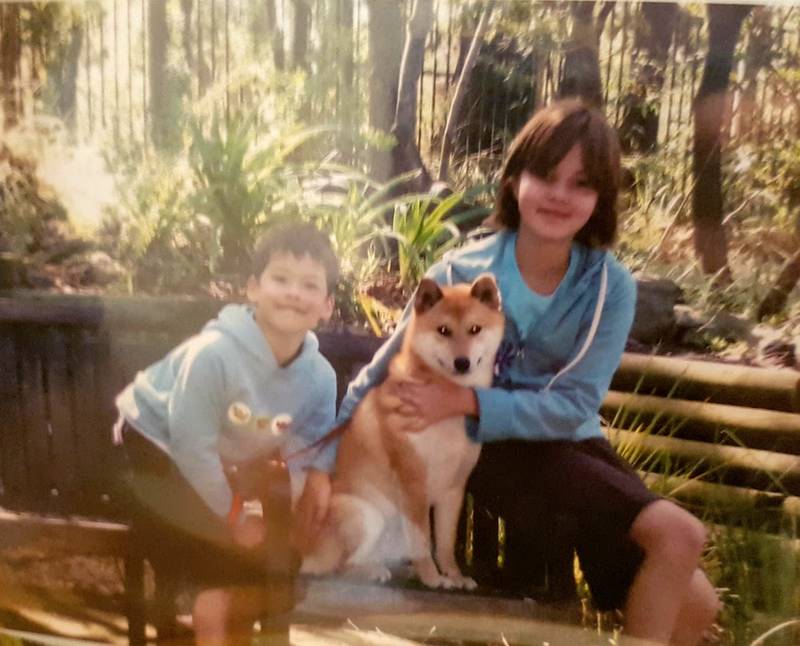 Aka was a year or two old in that photo (and that's me and my younger brother). You can see me holding onto him pretty tightly - it was the only way to get him to sit still for the photo!

My mum chose his name (Aka means "red" in Japanese) which was probably for the best because at the time I would've chosen a name like "Rusty" or "Foxy". She chose a Shiba Inu out of some sense of patriotism (she's Japanese) but didn't realise what a handful Shibas are. At the time his stubbornness was quite frustrating, probably moreso for my parents, but now I look back on those days with fondness.

He was smart too, but not in the way a normal dog would be. Like not doing tricks unless he could see the treat in your hand. He would pull so hard on the first half of our walks, but as soon as he realised we were heading back towards home, he would drag his feet and try to prolong the walk as long as he could. I remember one time when he escaped, and I was chasing him up the street, he actually crossed the road at a pedestrian crossing.

He was such a cute dog though, and you couldn't help but love him anyway. 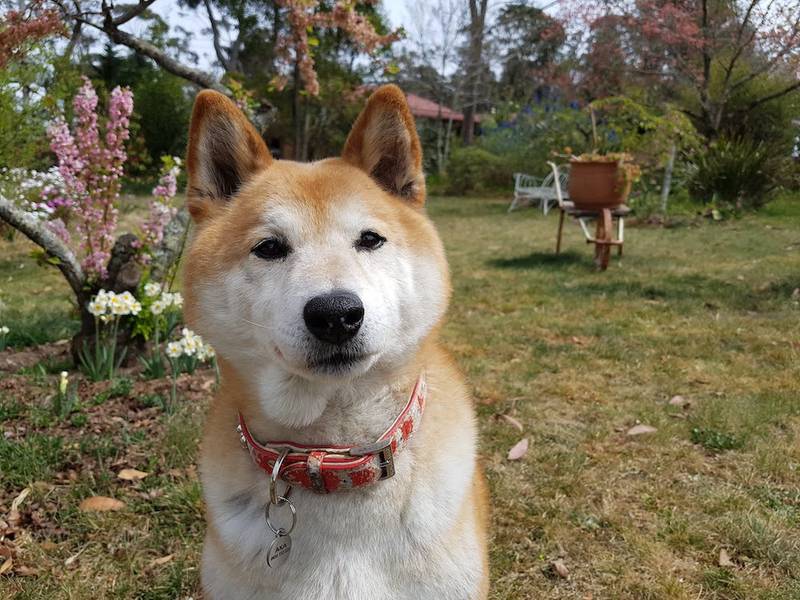 I took Aka with me when I moved out of home 5 years ago, and the good times continued. Sometimes on our walks, I would just experience this sense of sheer joy. Maybe it was the endorphins from the exercise but I would just see him walking and be so happy. I thought about his eventual death even then, and I knew it wasn't going to last forever, so I tried to be fully present in those moments the best I could.

Aka was never the kind of dog that was able to sit still, but he really chilled out as he got older. We would go to the park, and he was content to sit on the bench with me and enjoy the sunset. Once or twice we even shared a pizza (I gave him the crusts). 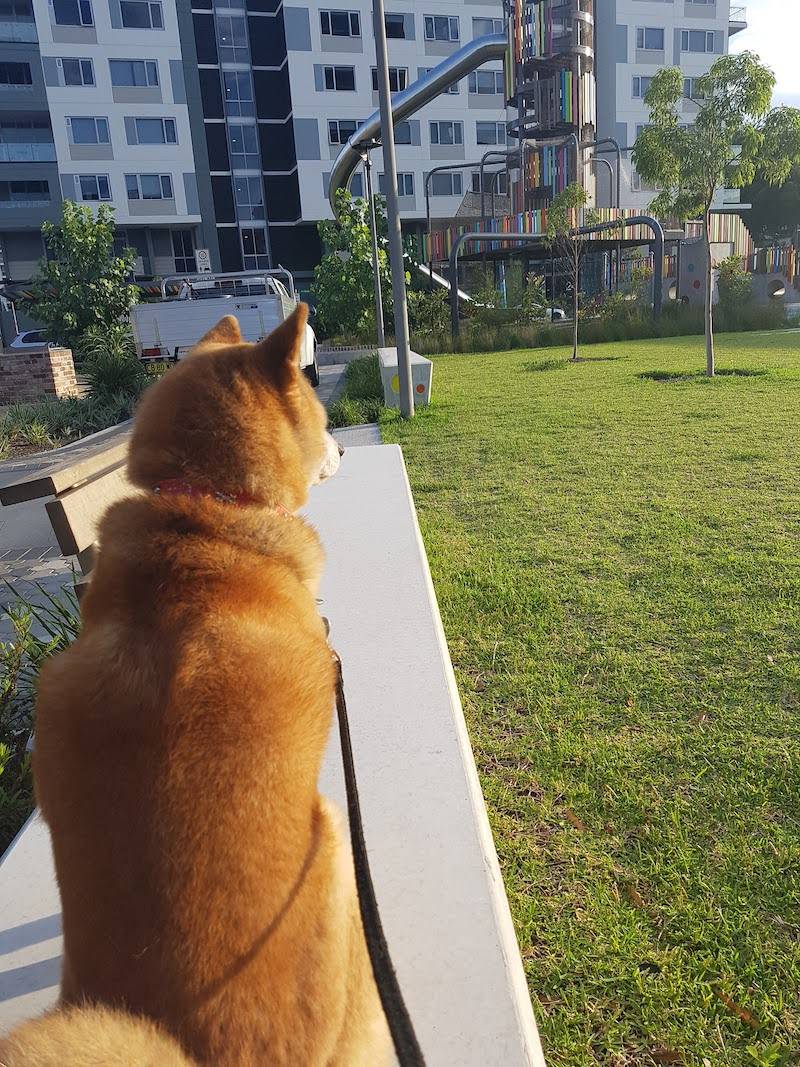 In March 2020 I transitioned to working from home full-time (thanks COVID!) which let me spend more time with Aka in his final years. By then he had already had two health scares - a diagnosis of "kidney failure" (his kidneys never really ended up failing) and a possibly cancerous mole that we were able to get cut out. In April 2020 he hurt his leg, which took some time to recover, and at some point in the months after he began displaying symptoms of dementia.

We trodded on into 2021, as Aka's health slowly worsened. Towards the end of May, my partner suddenly became ill and ended up in the hospital. At first we thought he would be in the hospital for a couple of days, then a couple of weeks, and it eventually ended up taking 2 months before he came home. 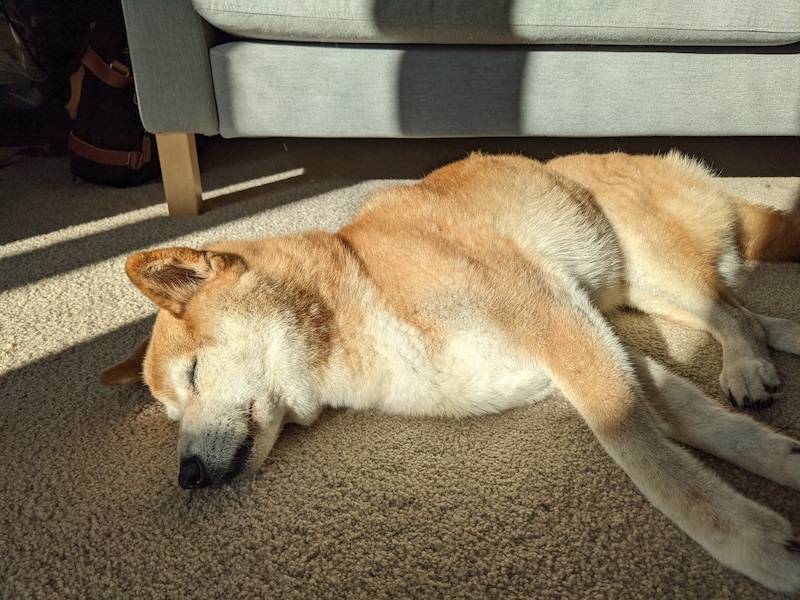 When I first realised my partner wasn’t going to be home within a week, I panicked a little bit. Aka was then 16 and his eventual death had been looming in the back of my mind. I knew that with his dementia and arthritis symptoms worsening we were going to have to make the painful decision to put him down at some point. While my partner was in the hospital though, I decided to stay positive, and to make the best of a bad situation and enjoy the time I had left with Aka.

It was a rough two months, juggling hospital visits with looking after Aka by myself. As we settled into our new routine some weeks felt quite peaceful, and so I appreciate that I had that time together with Aka. Towards the end though, I was quite scared of the possibility that I would have to put Aka down before my partner could come home.

But he did make it home, and a week later, we made the difficult decision to euthanise Aka on the 31st of July, 2021. 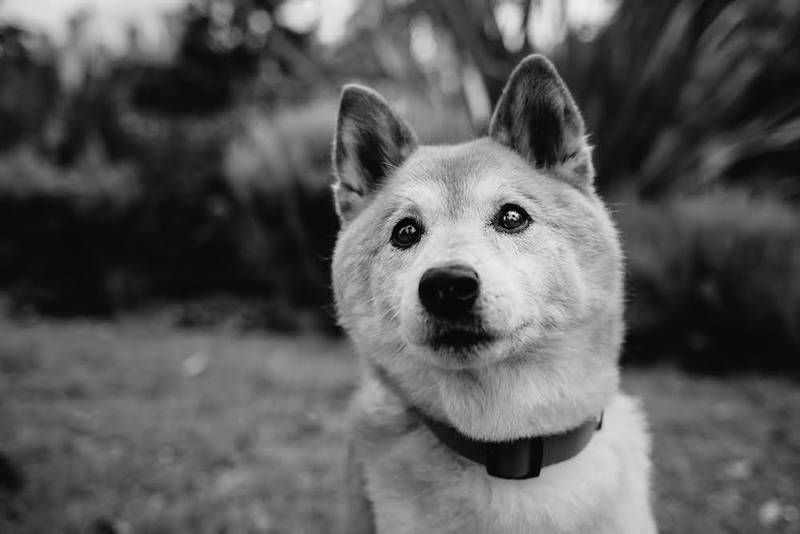 I was dreading his death and the ensuing grief for a long time, but I think the overwhelming feeling at the moment is just a sense of gratitude. I’m really glad for all the time and good memories that we had together.

After Aka’s passing, I decided to take all of August off from work.

I had some vague plans of being “productive” in my month off but instead I ended up going on week-long binges of different things. Video games (Anno 1800, Graveyard Keeper), anime (too many to list but I’m enjoying Fena: Pirate Princess at the moment), fanfiction (don’t ask) and some fantasy books.

I also walked about 200km which was really good for keeping my mind off of things. I've managed to maintain this walking habit into September, and I'm now walking a more reasonable 35km a week.

For a long time I’ve wanted to move to Japan, and that was always something I had planned to do once Aka passed away (I didn’t want to put him through the stress of a plane trip). Maybe it sounds morbid, but for me that had always been the "silver lining" of Aka's death.

Unfortunately with the COVID situation in Australia and Japan at the moment, I’m not sure exactly when that will be happening. Some days things feel kind of hopeless with this never-ending pandemic, other days I’m excited and looking forward to spending some time in Japan. In the meantime I'm just taking things one day at a time.

I'd love to get another Shiba one day. Probably a black or white one, just so it doesn't quite look the same as Aka. Sometimes I joke about my dream of owning a house in the countryside of Japan, with Mt Fuji visible in the distance. A big backyard with a koi pond, one of those little Japanese wooden bridges over a river and at least ten Shibas frolicking in the garden.

Not a very realistic dream, I know. But I'd love to have a couple of Shibas. Maybe when I get sick of programming I could switch to running a Shiba rescue, who knows. 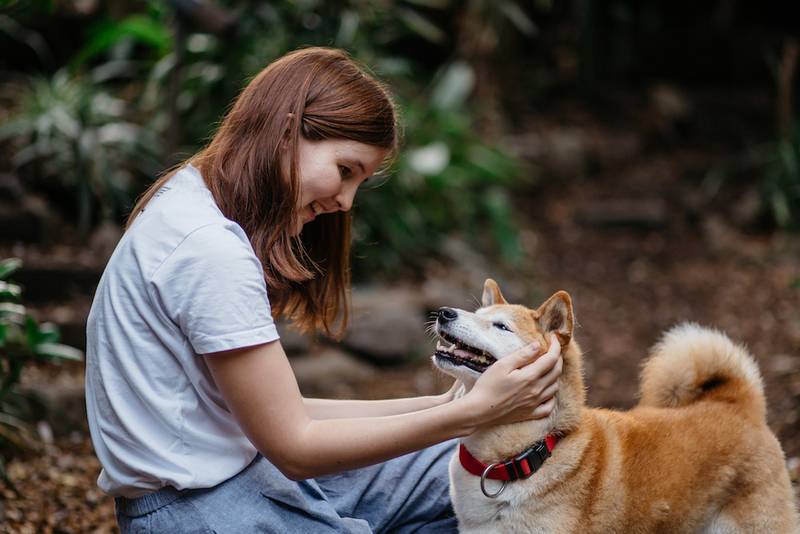